One of the best things about living on the Outer Banks is its active and creative art scene. It spans all ages and genres and filters into every aspect of our way of life.

And here’s the most remarkable thing about it–almost everyone who’s involved in the local arts scene can trace at least part of their success back to the same person, Glenn Eure. He’s in his 80s now, and he might have slowed down a bit, but he remains in many ways the heart and soul of the creative Outer Banks spirit.

With his wife, Pat, he is hosting the 36th Annual Frank Stick Memorial Art Show at his Ghost Fleet Gallery in Nags Head through February 21, 2014. The gallery itself is as unique as Glenn–a wooden quonset hut-like structure that has the appearance of being built over a long weekend, which isn’t far from the truth. According to Glenn, he and a local carpenter built the Gallery back in the 1970s.

His art is an eclectic combination of modern art, personalized boat paintings, small prints, huge multi-media murals, and frankly just about anything he’s in the mood to create including an interesting variety of clowns. There is typically a local artist’s work featured in the Gallery for a month. The exceptions are when he hosts the annual Frank Stick Show, which is all about local artists; and when he hosts the Dare County Schools Student Art show, which features up and coming talent.

The public persona of Glenn includes his limitless supply of jokes and his genuine appreciation of women visiting his gallery, who all receive the same compliment, “You are the most beautiful example of femininity I’ve seen all day.” Yet, there is another side of his personal history that is vastly unknown.

Glenn was born in Hawaii and still delights in greeting people in Hawaiian, much to their confusion. He had a long and distinguished career in the Army, retiring as a Major. He led an artillery battalion in Vietnam while serving two tours of duty. When he returned home he went to ECU, where he met his wife Pat and received his art degree.

His talent and commitment to public service have earned him many accolades. Glenn has received the “Service Above Self” award, presented by the Rotary International President, and it is received annually by 50 recipients hand selected from over 2 million Rotarians. He also received the “Order of the Long Leaf Pine” honor from the Governor of North Carolina, the highest civilian distinction in the state. Glenn designed the concept for the Kitty Hawk Monument to a Century of Flight, which was brought to life by acclaimed sculptors, Hanna Jubran and Jodi Hollnagel Jubran. In addition, he was honored by the Town of Nags Head as their “Keeper of the Light,” and at the Land of the Beginnings Festival in 2010, Glenn was proclaimed an Outer Banks Living Legend. 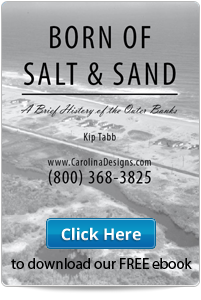 A little known fact about Glenn is that he is a deeply religious and spiritual man, and it was through this spiritual connection that he produced his greatest work. Lining the walls above the pews of the Holy Redeemer Catholic Church in Kitty Hawk are the 13 Stations of the Cross, the Via Crucis. Life-size and hand-carved, they are remarkably realistic and produced with great care and skill. Glenn donated everything to the church, his time, the materials and the end result of his inspired work.

When asked about this accomplishment, he quickly changes the subject and is off to storytelling. That’s just Glenn’s way. He tends to deflect praise from himself, preferring to send it elsewhere where it’s needed more. Yet to anyone who has lived on or visited the Outer Banks for any length of time, he is a part of what makes our area uniquely wonderful. Like the mighty Atlantic or our award-winning pristine beaches, Glenn Eure is a part of our memorable natural landscape.